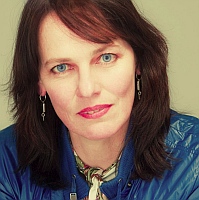 Cora Bos-Kroese started dancing at the age of 7 in South‐Africa.

She followed her ballet education with the Lynne Harisson School

of Dance when living in New Zealand.

School in London. In 1985 she went to the Koninklijk

Conservatorium in Den Haag, where she graduated in 1986.

In 1988 she continued into the main company, Netherlands Dance Theatre 1, where she danced

In this period she worked with choreographers  Jiří Kylián, William Forsythe, Mats Ek,

Jiří Kylián created pieces on her, to name a few: 'One of a Kind', 'Falling Angels', 'Petite Mort',

In this period she danced leading roles- 'In the Middle -somewhat elevated-',

'Vile Parody to Address' and 'Duo'.

For C-scope Cora created her own choreographies: 'Trespass', 'Mizu',  'Under my feet',

But also leading community art projects 'Loket 25'  together with Dogtroep.

Roberta Mosca in the Italian mountain-region of Piemonte.

In 2011/ 2013 she created AMOR a project with Kamerkoor Kwintessens, dancers Aurelie Cayla,

churches through Holland. In 2014 she created a new work for NYU Two-ways Towards.

From 2005 -2007, Cora has worked as a ballet master at the Netherlands Dance Theatre.

Presently she works mostly abroad, setting Kylian works  like ‘Bella Figura’, ‘One of a Kind’,

C-scope is an initiative of Cora Bos-Kroese, creating projects combining

dance and multi-disciplinary artists on diverse locations and theatres.

C-scope has an openness, raw energy and aims for a high quality around

using its large network of dancers, musicians, artists from around the world.